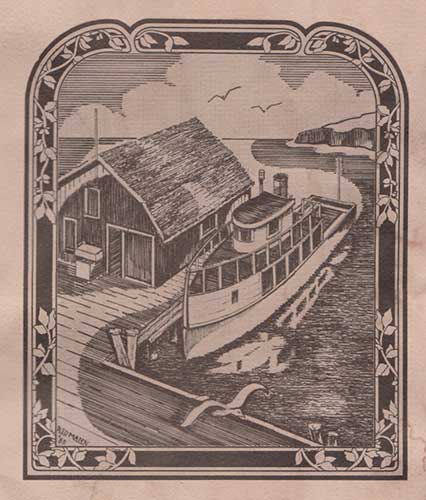 In 1853 there was just one chimney between Green Bay and Washington Island as Asa Thorp made his way down the shore by steamboat. The chimney marked the dwelling of Increase Clafin, Door County's first settler, who had chosen Fish Creek's little cove as his second home in the county. (Ed. note- Clafin's sons would later carve out the basement of the Ellmann House.) Asa Thorp was a footloose young cooper from Lockport, New York where he and his family were lock tenders on the new Erie Barge Canal. He found the area to his liking, and settled near Clafin. 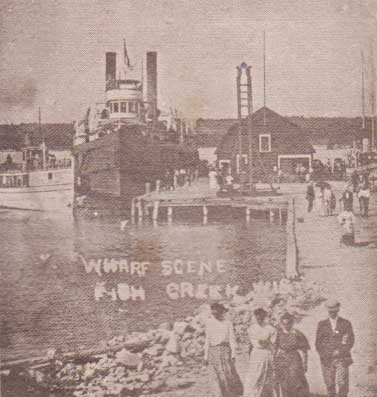 To provide fuel for their hungry boilers, the steamers would stop so the crew could cut fire wood. Asa was looking for an opportunity to establish himself somewhere in this wild western world, and at Fish Creek he found it, a harbor and a site for a wood loading dock and ample forests to sustain a wood cutting business. Thorp filed on a large section of land around the little harbor, and later developed a dock and wood looding station with the help of his brothers, Levi and Jacob. As he had forseen, Fish Creek became a regular stopping place for steamboats. Farmers and fisherman arrived and the village grew slowly all during the nineteenth century.

Asa built a large dwelling house with extra rooms for the travelers, which became a hotel. So did other buildings with room to grow, and as soon as accommodations were available, the steamboats brought tourists from Chicago and St. Louis, looking to escape the summer heat in the sweltering cities.

The early hotels operated farms on the side to provide food for their tables. Asa got $7.50 a week for room and board for an adult guest in the Thorp Hotel in the 1800's. Early tourists came by steamboat, there being no auto roads into the peninsula.

Between Fish Creek and Eagle Harbor was a tract of mixed forests, bluffs and small farms which later became Peninsula State Park by an act of the Wisconsin Legislature. Some of the farms were abandoned and slowly reverted to forests again. The sawmills fell silent and the lumber schooners halted their busy routes between the mills and cities. Some of the cleared areas were replanted to pines and conifers and today are sizable trees. 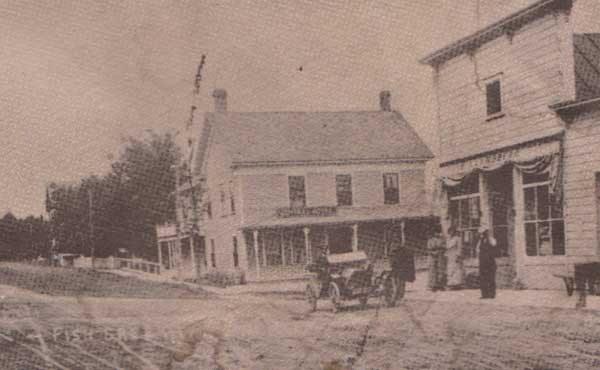 The early tourist business was the result of accidental growth. Large homes with a bedroom to spare became "rooming houses" for overnight guests. Asa's home became the Thorp Hotel. A Dr. Herman Welcker had a large club house brought on sections ove the ice from Marinette, and reassmbled in Fish Creek to form a health resort. Called "The Casino", this is now the Proud Mary. Other surviving buildings from the Welcker Resort are the present White Gull Inn and cottages near the end of Main Street. In 1896 Dr. Welcker built a large cottage named after Mrs. Welcker, "The Henrietta". Other cottages have feminine names. Meals were served at a dining room near the Thorp Hotel. The former Thorp Hotel, destroyed by fire in February 1984 and rebuilt, became Founder's Square. The C&C club was long ago the Central Hotel, then Barringer's Hotel.

The main streets of Fish Creek are lined with over forty structures built near the turn of the centruy, many of them still owned by decendants of the original settlers. In addition to the Proud Mary, Founder's Square and the C&C, there are the Noble House at the corner of Hwy. 42 and Main Street, the Asa Thorp cabin behind Founder's Square, the Episcopal Church, the Town Hall, both grocery stores at the corner, and a number of homes scattered throughout the village.

Social organizations arose, including the Fish Creek Women's Club, the Royal Neighbors, and various church groups. In 1927 a group of men formed The Gibralter Civic Club, Incorporated. Called "The Men's Club", the organization promoted several projects devoted to attracting tourists, such as a town dock and dock house, the development of a volunteer fire department and purchase of the first fire engine, a Knots-Victor gasoline vehicle, and encouragement of a fish planting program by the State Conversation Department. The Men's Club presented movies, minstrel shows and other public attractions at the Town Hall.

In 1950 another group was organized called the Fish Creek Business Association, whose members were both men and women. In 1952 the name was changed to the Fish Creek Civic Club, and in 1972 it became the Fish Creek Civic Association, Incorporated. Comprised of area business people, the Association has played a vital role in village affairs and seeks to continually improve accommodations and amenities for the thousands of vacationing visitors who come to enjoy our town. The group holds an annual "Peninsula Days" festival in summer and a Christmas Fair in December. An Information Center was established be the association and continues to provide maps, brochures and reservation from its location in the Community Building on Main Street.

Fish Creek is the hub of a network of hiking and biking trails with beautiful cliff top vistas at every turn, and the hiker often sights deer grazing at the trailside. In winter the gently rolling hills and trails are host to cross-country skiers and snowmobilers who love to tour the wooded slopes on the white blanket of snow and look far across Green Bay's frozen cover.

The village has a fine municipal pier, mooring for boats, a special anchorage for sailboats, and an excellent sand and swimming beach. It is surrounded by fruit orchards and in spring is bursting with cherry and apple blossoms. Sugar maples crown cliffs and hills, and line the village streets which make fall colors a glorious sight for autumn visitors. A place for all seasons! 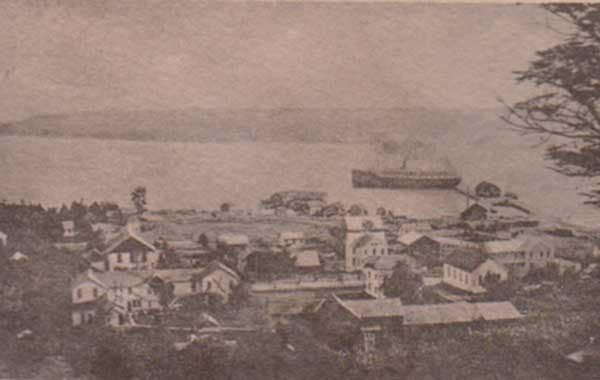